Welcoming All to our Spiritual Home on the Upper Cape
Facebook 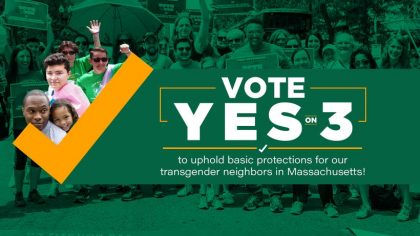 Yesterday at the vigil in solidarity with the Tree of Life Congregation, Rabbi Elias of the Falmouth Jewish Congregation told us one way we can show solidarity with the Jewish community: “support transgender rights.” How are these related? Because, as Rabbi Elias explained, when all minorities are in danger then everyone must come together and we all must side with each other. As Dr Martin Luther King Jr said, “a threat to justice anywhere is a threat to justice everywhere.”

That’s why our Fellowship formally endorses a Yes vote on Ballot Question 3. A Yes vote supports keeping “gender identity” included in the list of classes protected from discrimination in public accommodations (including doctor offices, shopping malls, public restrooms, public parks, etc.). A no vote removes “gender identity” from this list.

To put it bluntly: a yes vote is the only truly moral vote on this issue.

Those who have put Question 3 on the ballot are alleging that the current law endangers women and children by being too broad; they argue that it provides too much legal room for sexual predators to use it to as a legal cover to enter women’s bathrooms and locker rooms. Their logo shows a man peeping over the stall of a bathroom at a woman in the next stall. You may have seen it, because they’ve been popping up all over the Upper Cape the last few days. The image is lurid, and sends a chill down my spine whenever I see it.

It is also a blatant and despicable lie.

The current law is not broad at all; it is very specific, and it provides no cover for crimes. That’s why there are ZERO cases of it being used to cover crimes since the law was passed two years ago. ZERO. No woman, no child, is put in danger by this law.

The No on 3 campaign keeps throwing out names and anecdotal stories of crimes in bathrooms and locker rooms, but NONE of these cases apply to the current law. Every case they cite is irrelevant; I know because I’ve painstakingly researched every single one. Only one involves a trans person breaking the law (and this was in another state and the person was fully prosecuted). Every other case they cite is distorted or an outright lie; they almost always involve folk in other states, men who are not trans and don’t pretend to be, and in every case the person was successfully prosecuted and held accountable.

This is all fear tactics. This is all lies. It should disgust any moral person who cares about truth. And it’s working. These loathsome and bigoted lies are turning a lot of Mass voters against transgender persons. We learned from Mason Dunn of the Massachusetts Transgender Political Coalition (who spoke at our Fellowship last Friday) that when people hear the “No on 3” ads the support for a Yes vote drops from 65% to 51%.

And yet, when those same persons are exposed to positive messaging, the number goes right back up!

So what will you do? Will you believe the lie, or will you vote for the worth and dignity of trans persons? Will you speak up when these lies are spoken by your friends and family, or when you see them on social media? Will you do whatever you can to reach out to others and give them facts, so they can vote for inherent worth and dignity?

Massachusetts will be the first state in the country to vote on transgender civil rights at the ballot box. The nation is watching. Frightened transgender persons and their loved ones all over the nation and the world are watching. We will either set the moral agenda for the nation or play a part in yet more rollbacks of justice. The “No on 3” campaign has openly said that if they win here in MA they are planning to move on to other states and repeal their legal protections as well.

Vote yes on 3.
Talk to your neighbors and friends and tell them the truth. Resist the lies.
Consider donating to help the Yes side buy much needed ad time in this urgent final week: https://www.freedommassachusetts.org
Lives are at stake. Literally.
Let’s do this.