Welcoming All to our Spiritual Home on the Upper Cape
Facebook

That’s what a local resident of Falmouth recently said to me about the state of our nation, and I agree. These are difficult times. It’s hard to keep track of which oppressed or endangered minority is being attacked now, as civil rights protections keep being rolled back and more and more groups become scapegoats. There are the outright attacks on science, the increasing global conflicts, the government shutdown, and just an all-around increase in anxiety and tension nationwide greater than many of us have seen in our lifetimes.

Who are we called to be in a time such as this?

We are called to be different.

Perhaps, above all else, we’re called to be people of faith.

Faith in each other. Human beings are capable of more. We can be better than this, and we know that’s true because at no other time in my life have I seen so many rise up and say “No!” That’s my source of hope: all the voices of love and justice coming from ordinary people. This is a time we need faith in each other and faith in ourselves.

That’s the vision of Unitarian Universalism. That’s the “good news” we proclaim every Sunday and that we try our best to live out every day in between. We’re not alone in this; we share these liberal religious ideals with folk in many other faith traditions and denominations. That gives me hope also.

Don’t give up. We will survive this  if we stick together and remain committed to something bigger and greater and (dare I say it?) Holier than all this chaos.

Like the Samurai poet Mizuta Masahide wrote in haiku: “Barn’s burnt down– / now / I can see the moon.” When what we’ve known burns down, it is terrifying, but it also create possibility. In a time when so much is burning down, let us look through the fire and chaos and put our hope in the new world we can create together. And may that future begin with the new way we live right now. 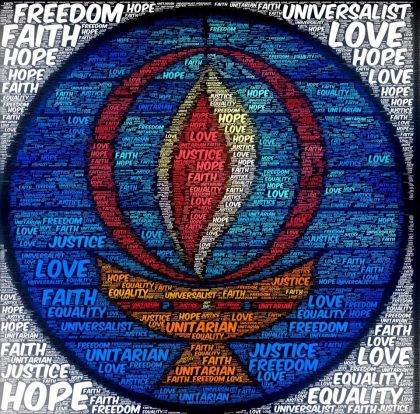